Yesterday’s Gleaner carried a fascinating story about one of Jamaica’s most famous slave-bandits – Jack Mansong, otherwise known as Three-Finger Jack. I have added this article to my random collection of pieces that may or may not inspire future work. I am fascinated by his alleged surname. There is obvious poetry in that (maybe too obvious) – a rebel who sang the song of men. But also, I’m interested in his death at the hands of a Maroon. The Gleaner describes it like this:

“Decapitated, his head was put on a pole and carried by his proud victors, followed by a crowd, celebrating as they marched first to Morant Bay and then to Spanish Town to collect the reward of £300.”

Is it morbid, my recent fascination with the headless black body, or my desire tell the stories of headless black people? I’ve told some friends already about one of my stranger (even scarier) moments in Glasgow. I was walking on Sauchiehall Street, passing the All Saints store, and saw their window display. The mannequins were all black. They were all headless. And they were all swinging from chains! Imagine that – the one time I was able to see myself represented in a high-street fashion store, I was being lynched.

I found out subsequently that these displays had been up for a long while – since 2007 and other people across Britain had had my reaction and complained. It was clear, however, that the store loved the controversy. They gave a half-arsed response about it being edgy, about it being arty, about the mannequins being grey and not black, and they left it like that. You can read about that here.

If you think about it, headless black bodies are everywhere, sometimes in the most seemingly innocent of places. In cartoons for instance. Do you remember Tom and Jerry? Do you remember the headless black woman? The one who always shouted ‘Thoooomaaasss!’ Her name was Mammy Two Shoes, and for a while I have wanted to write a poem, or even a sequence of poems for her. I’m sure I will, so watch this space.

And I also remember the bizarre moment when a white-American girl told me how she had visited Jamaica, and how she had loved driving on all the country roads, and how gorgeous all those shirtless Jamaican men were. She said she had never seen bodies so beautiful. But then she stopped to consider this. She corrected herself, ‘They weren’t always very handsome. Sometimes I wished I could take them without their heads.’ Strange that – how on one hand she could fetishize the black man, even while she beheaded him. Or maybe that was precisely the fetish.

Call me ghoulish for looking this up, but I now know that the decapitated head stays conscious for about eleven seconds. What a horrible eleven seconds those must be – bleeding, dying, knowing that you have been made separate from your body. Still, it seems for some of us, those eleven seconds have lasted, and lasted… 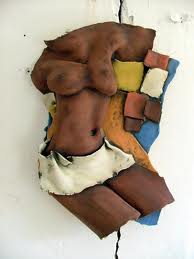 8 thoughts on “The Headless Black Body”