So that’s it for me – the week of blogging on reggae songs comes to an end. But how could I leave off without talking about the biggest tune in Jamaica right now – the phenomenon that is ‘Nobody Canna Cross It’. For is not only that Clifton buss, but that de man buss big. If Muta has his way Clifton will be appearing on Sting this year. On his radio talkshow Muta advised Clifton that he doesn’t even need to sing – he just needs to run on stage, shout ‘Nobody canna cross it, cross it’ and run back off. When him do that, ‘de place mash up!’ says Muta. Clifton Brown is the new big artist, but I agree with my friend Oliver who said: ‘Clifton, use your 15 minutes well! You have about 11 remaining.’

Not only is this the last blog in this weeklong series, I want it to be a sort of benediction for Clifton – that wonderful opposite of an iron balloon – already riding off into his sunset.

For my non-Jamaican readers, a bit of context: in Jamaica we call some people ‘iron balloons’ – definition being ‘dem whaa buss but cyaa buss!’ (they want to burst – as in, on the scene! – but they can’t burst). These hopefuls can be found at every Karaoke. They make it impossible for the truly untalented to go up on stage and have a bit of fun, monopolizing the microphone as if it was X-Factor or American Idol and Simon Cowell was in the audience. They badly, badly want to ‘buss’ but between them and fame stretches a wide river, and they just canna cross it.

Clifton wasn’t trying to buss, but him buss all the same. Blame it on technology. Blame it on the fact that Jamaicans have ‘logged on’. See my earlier post on that. Here is what happened: Clifton was featured on the local news recently. He was urging the authorities to build a bridge in his community of Robinsfield. The main road had been made impassable by a flooded river, and according to Clifton it was ‘only the mercy of God’ that no one or no vehicle had been washed away to sea. Clifton, being on camera and sending his desperate appeal out to people with money and power, tried to make his speech sound ‘proper’. It didn’t work out well and middle-class Jamaica wet themselves laughing at the attempt.

It didn’t stop there. A young fellow who has called himself DJ Powa (apparently we have several mutual friends, and used to go to the same church) got the news clip, spliced it every which way, built a rhythm on his computer, put the thing back together, and uploaded it as a new song on YouTube. Well my dears – the thing went large!

Now all this will sound very familiar to some of you. You will be thinking of the situation just last year that made Antoine Dodson into what Wikipedia now calls ‘an accidental singer’. Dodson also appeared on the news – NBC this time – and like Clifton, Antoine’s interview was also remixed and made into a song and music video. That video also went viral, but on a much larger scale. Today it is officially one of the most watched YouTube videos of all time. The song entered the Billboard Hot 100 charts and Antoine even performed at the Billboard Hip Hop Awards show last year.

There is much talk in Jamaica now about DJ Powa’s talent. This is completely deserved. The boy has skills. But there is also much talk about innovation and trendsetting and ‘watershed moments’. That is a little overblown. A new concept this video is not. And that’s fine. I’ve said already in an earlier post  that innovation is over-rated. But let us at least acknowledge that this is just Jamaica following the fashion trend of ‘auto-tuning the news’.

But I am wasting time. Even as I write Clifton’s proverbial fame time continues to run out. He probably only has six minutes left.

This Caribbean word ‘buss’ can be used in almost every sense of its English equivalent ‘burst’. You can buss pon de scene; you can buss de news; you can buss de lid open on an issue; your heart can buss wid joy, or else wid grief. This is why Clifton is the opposite of an iron balloon – de man never want to buss, but him buss. And him never only buss himself, but him buss de news, him buss de lid open on several issues, and over the last fortnight him make plenty people buss out a big laugh, and for others he made their hearts buss wid sadness.

Here is what the big new song on the island has been forcing Jamaicans to think and talk about:

Now that the song is being downloaded off of  itunes, and merchandise is being sold, where is Clifton’s money? Surely it could not all be going to DJ Powa? Look – we acknowledge that DJ Powa was probably not setting out to exploit poor people; he was just having fun on his computer. And we acknowledge that Clifton did not set out to sing a song or buss; he was just giving an interview. And yes, the fact of the song and the video is all DJ Powa’s manipulation – but still, without Clifton there is no song. He is the talent. So now that money is involved, is he getting a cut?  I really hope so. It is one thing to dismiss some people as not having much intellectual capacity, but it is a whole other thing to dismiss the fact that they still have intellectual property rights. The first is just snobbery, and you will have to wrestle with your own conscience about that, but the second is straight exploitation, and illegal)

And what does it mean to live in a country where a man could describe himself and his community as being ‘locked away in the wilderness’? Where is Robin’s Field, and are there many other places like it? Of course there are. Clifton’s complaint was about a road washed away by a river. He was asking for a bridge. But there are bigger divisions happening in Jamaica and many other kinds of bridges that need to be built. 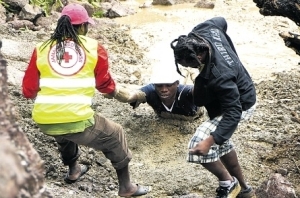 And when is it OK to laugh? And when should that laughter stop? One of my friends is unable to laugh at Joan Andrea Hutchinson’s poetry. I always complain that she is being a killjoy. I keep on telling her – but the poems are funny! And they are. But my friend just can’t bring herself to it. She feels that the humour is always about middle-class people laughing at others who through no fault of their own, not even because of some pretentiousness, are being made a mockery of. My friend and I have agreed to disagree. But in the case of Clifton I finally got it. The interview on Smile Jamaica with those two men falling over themselves and cackling at this poor man from Robinsfield who was clearly not amused, who was only asking for a bridge, who was confronted yet again by a camera and didn’t feel he could access a language to tell these two assholes what to do with themselves — it was a hard, hard thing to watch.

Antoine Dodson in America at least got to move his family out of the ghetto from the proceeds from his accidental stardom. It is unsure whether Clifton will get his bridge, and he probably only has three minutes of stardom left.

By the way, here is Clifton’s video.

4 thoughts on “The Opposite of An Iron Balloon: Clifton (Cliff-Twang) Brown’s 2011 ‘Nobody Canna Cross It’”

Leave a Reply to Mark A Warmington Cancel reply