If it is a cliché for the writer, in one of his many acknowledgments over the course of a career, to give honour to his high school English teacher, it is only because such honour is always due, and is never enough anyway, and besides, all clichés are routed in truths. So that being said –  give honour to Miss Jeffrey – English teacher extraordinaire from Wolmer’s Boys’, Heroes Circle, Jamaica.

But – honours not withstanding – was there ever a teacher so strange? Make no mistake – in the context of a Jamaican high school, Miss Jeffrey was very good, and also very strange! You see, while every other teacher believed wholeheartedly in the monotony of their voices, and that bestowing the gift of their monotony on a class of teenage boys was a way to build good character in young men; and while every other teacher believed that the most daring they would ever get as teachers is to use coloured chalk on the blackboard (look, red! Look, green!); and while every other teacher gave lessons that even they seemed not to listen to; and while every other teacher taught with such a lack of inspiration that indeed we came to sincerely believe that this lack of inspiration was the defining  quality of a good teacher, and we felt towards them what one might feel towards a monk or a priest – a kind of pity, but also a kind of respect for the vow they had obviously taken, not of povery, but to live an uninspired life; and there in the midst of that came a woman by the name of Sanjo Jeffrey, trying hard to be inspiring and creative. Creativity! Inspiration? It really was very odd, and some us we were confused by it.

With Miss Jeffrey, you never knew what class was going to be. Maybe a movie – maybe a debate – maybe a board game she had invented the night before. There were also field trips, and make up sessions at her house in Portmore on a Sunday. And while every other teacher would charge for such lessons, she didn’t. So seriously – was there ever a teacher so strange?

Sanjo’s creativity extended to her very person. A few times she put her hair in fine braids and attached little foil tips to the end of each braid. What then appeared to be metallic dreadlocks was a bit of a mistake. The boys invented a new nickname for her: Predator. 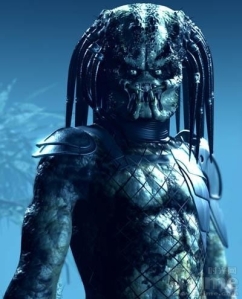 On an aside – it’s actually kind of funny to think back to Wolmers’ and the names was gave our teachers. There was Fathead, an accounts teachers – a portly man driven occasionally to tears because the boys took wicked pleasure each day in asking him questions in which the word ‘head’ was always grossly emphasised. When the last bell struck for instance, they might say, ‘Sir!!? Are you….HEAD-ing home?’ Fathead’s best friend was the Maths teacher, Frecklebomb; and there was Punisher, famous of course for coming up with elaborate punishments; Mount Everbreast was a woman with breasts that seemed unnaturally perky for her old age; Atom Bottom was the chemistry teacher; Barney Rubble, the principal; Scabba, the infamous history teacher; Peadove, the physics teacher who couldn’t die; and of course, Predator.

It isn’t the onset of old age and its attendant nostalgia that is making me remember her now. Actually, I have just been to see her. Of course, it has been years and years and then some, but it didn’t seem she had aged at all. A head of fine dreadlocks was probably the one cosmetic difference, and thankfully there were no foil tips at the end.

It was Miss Jeffrey who found me, on Facebook of course, and what a surprise to find out she was now living in England, teaching at a high school for kids who are maybe too much trouble for a more traditional kind of high school. And so I went to London today because my old teacher asked me to come in and talk to her students.

I woke up at 4:30 am and took the train from Glasgow and this by itself is testament to her strange creativity and inspiration all those years ago. When I got to the school, I found out there were a few of us called in – professionals asked to be inspiring to the kids. That was our simultaneously simple and impossible instruction: Be inspiring!

We were each put in a room and groups of students rotated in and out, come to listen to us waffle on about ourselves. We were told, at least, that if the students started cussing, or if they walked out on us, or yawned in our faces, or threw things at us,  that it wasn’t our fault and we should just ignore it. Needless to say, I was properly scared.

I the end, I decided I that I didn’t know how to be inspiring, but I did know how to tell stories. So that’s what I did. For every group that came in, I just I kept on telling stories, without being quite sure what the point of each story was. It was Scheherazade’s tale all over – the story teller afraid for his life, desperately telling story after story, only to stay alive.

So who knows. Maybe I was inspiring, but maybe I wasn’t. And I think it doesn’t matter either way – because those students have one of the most inspiring teachers I have ever had; the woman who, for instance, put Emily Dickinson so firmly in my heart that Queen of Calvary is condemned to haunt my poetry, even if in small and almost undetectable ways. And those kids have her – not Dickinson, but Sanjo.

And isn’t that the more important thing – not the fly-by speaker who comes in to pompously declare what a success he has been – but the teacher who is there every day, maybe with foil in her hair, and with her invented games and all of her strange ways, this woman who will not have the luck of Scheherazade , but who will often come to the end of her stories, will get cursed at, laughed at, mocked, who will occasionally die a little on the inside – and who will accept the obvious, that we can’t be inspirational all the time, but we can simply be there for a lot of the time – and maybe, just maybe, in a future year, one of these students will think back at it all, and will risk a cliché – will ‘turn thanks’ to their former teacher, will write on the sky, To Miss Jeffrey, with love. 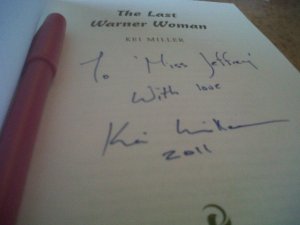 6 thoughts on “To Miss [Jeffrey] With Love”