‘Put a statue up in Jamaica,’ Wayne said, ‘and the next morning everyone going to pass that statue in silence. In a kinda reverence. Jamaicans seem to have a sense of things being sacred, of things so serious that you should never ever mock it. But put that same statue up in Trinidad and the next day people deface it, or they throw garbage at it – because in Trinidad we have this other kinda sense – that you can’t take things so serious, and that everything ought to be mocked. ‘

Wayne’s thesis was that Jamaicans tended to be better poets – from Dennis Scott to Lorna Goodison to Bob Marley, it was this sense of the sacred that they could carry off without seeming awkward – a deep well of belief that gave an incredible power to their work. And Wayne argued  that it was because Trinidadians didn’t have this sense that the country had produced such outstanding novelists. From the likes of VS Naipaul to Earl Lovelace to Sam Selvon – it was their sense of satire, a sense that nothing was so sacred that they couldn’t challenge it.

It’s a strange truth that for years I have looked on statues in Jamaica and thought, if only I had the guts to throw a can of red paint on it, maybe I could be a better novelist. In such moments one feels rather like the famous blues guitarist, Robert Johnson, at a crossroads contemplating the trade of one’s soul for greater artistic skill.

I don’t know the literary talent or credentials of those who did in fact deface Bob Marley’s statue last night. The vandals seemed to have merely thrown a blob of paint at it rather than graffiti words which could have shown us some kind of verve, some kind of felicity with language – even if that language was not English. You see, the Bob Marley statue stands outside the National Stadium and blame for the act of vandalism has been put at the feet of the Costa Ricans who we had been playing against in a fierce football match.

As Wayne Brown would have accurately predicted, the nation this morning has reacted with shock and horror, our collective hands pressed against our collective foreheads. But Bob Marley’s statue outside of the stadium is no stranger to controversy. Some of us might remember that this late work by Alvin Marriott (we imagine him trying to hold his tools straight while he struggled with the onset of Parkinsons) was not the original statue commissioned by the government.

The original statue by Christopher Gonzales is a superior work of art. It shows the figure of a singing Bob Marley, naked, his locks and his limbs morphing in and out from the roots of a tree.  That statue didn’t last long. People just didn’t get it.  Its allusions were too many, and if one is allowed to steal adjectives from across genres – I would say that the Jamaican public wanted something literal, rather than something literary.  In any case, I believe Bob Marley’s family in particular did not appreciate it. Alvin Marriott’s skills are not insubstantial, but his work just isn’t as interesting (to me at least) as Gonzales’s. 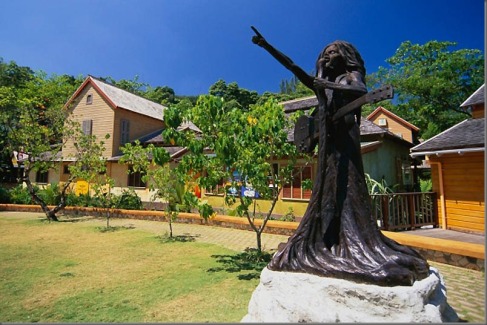 Gonzales’s statue was neither the first nor last public commission of art to be controversial on the island. In 1965 the Paul Bogle memorial done by Edna Manley was mounted outside of the Morant Bay courthouse. Once again, no one cared about its symbolic strength. People wanted something literal and were annoyed that this thing called art did not look exactly like the man it claimed to honour. Though Manley’s statue has stayed, the call has been repeated every few years for it to be taken down and replaced by something more suitable, something more in the likeness of the actual picture of Paul Bogle. 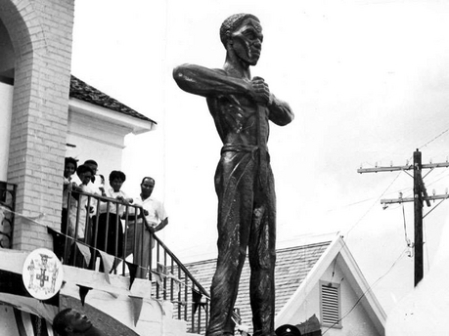 The fairly recent Emancipation statue in New Kingston has also been controversial. Laura Facey was probably wise to stay away from representing actual people. She probably couldn’t bother with any accusation that her work did not look exactly like so and so. Still, she did not dodge the bullet of public uproar and outrage. At first grannies everywhere were shocked at the gigantic size of the statue and the corresponding size of the male figure’s penis. The nation blushed. Mothers covered the eyes of their children as they walked by. The park which the monument stands in front of was even called Penis Park for a long while and this gave Lloyd Lovindeer a new hit song with ‘Happiness in the Park’ which he sang to sound like ‘A Penis in the Park’. 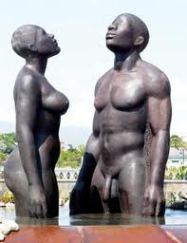 Professor Carolyn Cooper has waged a virtual one-woman campaign against the monument which she accuses (despite the controversial size of its genitals) of being too limp – imaginatively, that is. She takes issue especially with the placement of the hands by the sides of the two figures, slumped and seemingly defeated, rather than celebrating their newly won freedom. At least Cooper’s critique reads a subtext and a literariness into the statue. Still, despite all its controversy, no one has thought to throw garbage at or deface the emancipation monument. It’s a statue after all! It’s a serious ting! It’s sacred.

In Glasgow, in front of the Gallery of Modern Art, there stands the statue of the Duke of Wellington. In almost no picture of this statue, and certainly never in real life, will you see Wellington without an orange cone atop his head.  The statue was built in 1844. He started wearing his hat in the 1980s. What started out as a little prank, an act of defacement, has become one of the most iconic images of the city – has become a virtual and almost integral part of the sculpture itself and effectively modernized the work, making it a fitting welcome to the city’s collection of Modern and Post-Modern Art. The statue now nods to both the past and the future and acknowledges that important combination of seriousness and playfulness in art. Lonely Planet listed it in 2011 as one of the 10 most bizarre monuments in the world, but with time I don’t find it so bizarre at all. 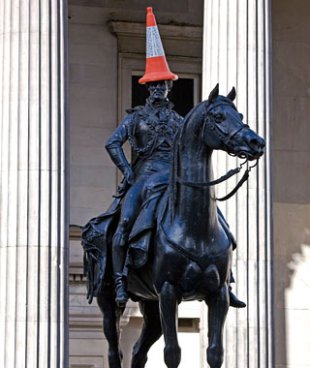 I don’t want to promote anarchy, but I’d much rather a world where we feel free to engage with public art, in sometimes amusing and controversial ways, rather than always bowing down in silence before it.