Those apologists who make the spurious claim that it is always the violence of Caribbean society that spills over into the violence of dancehall music, and never the other way around, will not know about that curious time when Jamaica’s Kingston Public Hospital saw a sudden spike in cases of broken penises.

Note the x-ray is a comic exaggeration. Penises don’t have bones. But ‘Penile Fracture’ is a bonafide condition.

It was in the time of daggering – which is to say, not so long ago – and a friend was working as an anaesthesiologist at the hospital, applying icepack after icepack onto weeping men’s groins before wheeling them into surgery. But how did they get there? Well, in Jamaica’s Dancehall culture, Daggering was as bizarre as it was a perfectly natural culmination of what had always been a space in which an aggressive masculinity was affirmed and constantly performed. Man ah bad man after all! As dances go, daggering was not any one set of moves. Many things could be considered daggering. Woman bent over, man behind thrusting violently, was pretty standard daggering, even if a little tame. The point was to exaggerate sexual copulation to ridiculous proportions. So it wasn’t really good daggering unless, at some point, the woman was lying on the floor completely passive and the man had mounted a speaker box, jumping all the way down to land violently on top of her.

And this is what disturbed many people – that the woman, not always, but ALMOST always, was just a passive receptacle, an inert body to be acted on. In one of the more extreme examples of daggering a woman was simply lying on the floor and then an entire table was thrown on her. Ouch! In another example, four men held the woman’s hands and feet, as if quartering her, while another went between her legs with a bottle of hot-pepper sauce and splashed it onto her exposed vagina.  Dancehall music as sung by both women and men seems to always affirm that sex is not good unless the woman is in pain, unless (according to Macka Diamond) she feels it up in her tripe, or unless (according to Buju Banton and Elephant Man) she runs screaming from it, or unless (according to another song) the pum-pum is properly damaged. Some songs even advocate the ‘buddy’ as an appropriate form of punishment for misbehaving women (‘yu tek mi tings an, yu tek mi money too, so tek buddy too! Tek buddy too!). In this way the sadomasochistic violence of the thrown table is a mere extension of the brutality of the penis, the sprinkled peppersauce perhaps an especially potent semen.

Daggering was never for the faint of heart. Thankfully (and yes, that is my judgment seeping in) it didn’t last too long. Still, only recently there were two pictures circulating around social media of women in Jamaican dancehall spaces, and these pictures – disturbing in several ways – owe much to the culture of daggering. 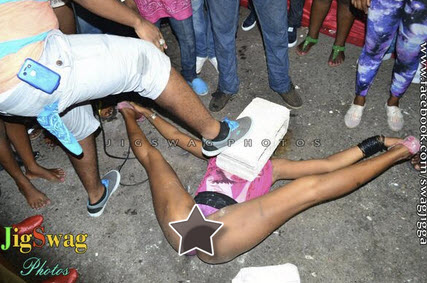 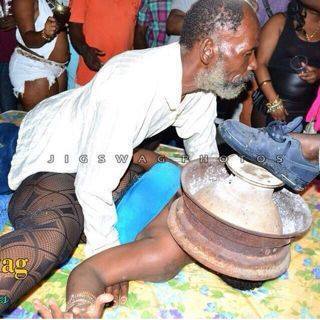 Note how the women are literally effaced by the hard industrial objects (a concrete block, and a tyre rim) placed on them. In both pictures, a man’s foot pressing on the concrete block or on the tyre rim makes the object quite literally an extension of himself, of maleness – a symbol, perhaps, of the punishing penis.

So in the time of daggering this is what happened: men would not only pretend at acrobatic and vigorous sex on the dancefloor; they took it into the bedrooms. My anaesthesiologist friend explained that too often the man, during intercourse, would pull out completely and slam his way back into the woman. Sometimes, however, he missed – his erect penis slamming into the pelvic bone below and cracking. One is almost tempted to see such trauma as a kind of karma.

If sex must be damaging, why shouldn’t it damage both parties equally?

The Jamaican Penis and National Identity

There is a joke that was told to me in high school. Perhaps like some penises – it has taken on a life of its own. So two men are at a urinal – a white man and a Jamaican (always these jokes are told like this, as if ‘Jamaican’ is the opposite of white…but that’s for another blog). Glancing to his left the white man can’t help but notice that, in its shrivelled form, the Jamaican man’s penis is tattooed, just as his is, and all that can be made out are the letters ‘W—Y’.

‘Oh!’ Exclaims the white man, ‘Do you have a girlfriend named WENDY as well!?’ for this is what the white man’s penis spells out in its fully erect state. Glancing to his right, the Jamaican man understands the question and laughs. ‘O no,’ he explains. ‘Mine says, WELCOME TO JAMAICA, HAVE A NICE DAY’

Beyond the joke, I think something quite profound is being said here about black masculinities and how they are constructed, or perhaps, erected. The exaggerated length of the black man’s penis gives him the authority to stand shoulder to shoulder beside a white man, and even to laugh condescendingly at his ‘limited’ understanding of things. Significantly, it is through his penis that he lays claim to a national identity – the tattoo quite literally giving him the language with which to claim his nation and extend an invitation to the outsider.

One of my friends insists that we must understand the always strident and sometimes violent heteronormativity of black cultures as a natural response by men who have been historically emasculated in every conceivable way – their land stolen from them, their women stolen from them, their children stolen from them – men who are referred to as boys, and who so often remain jobless and largely impotent in white societies. So if not through jobs, if not in their families, if not through the act of providing, how do these men lay claim to their manliness? Through their penises of course.

It makes me wonder if part of the moral panic and hysteria in Jamaica right now is partly related to these ways in which nationality is claimed on the island – not through flags, but through penises – a situation in which nationality and masculinity are sometimes confused as being the same things. Does the gay man represent someone whose penis has been metaphorically broken, broken supposedly by his own choice, a pathetic bruck-buddy man, and someone who therefore has forfeited the right to say to anyone, ‘Welcome to Jamaica. Have a nice day.’ as if this too were his country.

But of course there are so many prisms through which to look at what’s happening in Jamaica now.  It is quite a complicated thing. For it must also be seen and understood as part and parcel of another thing that has been happening in Uganda and in Nigeria – a reinforcing of homophobia largely funded by Right Wing American evangelists. These evangelists have been throwing a great big tantrum in America. They are upset with Obama and his left wing liberalism.  Obama is the devil. In retaliation to the progress being made in their own countries (progress from which they benefit economically) these evangelists have turned around and are carefully helping black nations (black nations in which they would, ironically, never live themselves) to hold firmly onto the backwardness of the glorious and righteous 18th century – a century in which one might suppose all laws were good and fair and just and Christian. Is there anything more evil than this – the white american church insisting on the underdevelopment of black nations?

The irony is lost on the Jamaican church (as irony is often lost on us) that while evangelists from overseas encourage us to hold on to white colonial laws which had been imposed on us, we then turn around and say to our congregations, ‘We must resist foreign influence!’

17 thoughts on “On That Island of Broken Penises”